I run Bob Ross lessons in Milton Keynes. In fact it appears that I am the only Bob Ross instructor in Buckinghamshire. If I can’t bring the Bob Ross way of painting into the Milton Keynes and Buckingham area, then I should resign from the human race. 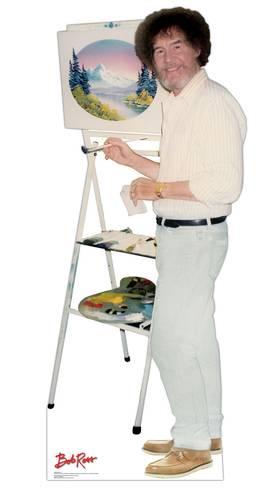 He produced a series of TV shows between 1983 to 1994 called “The Joy of Painting”, and these shows are still running to day. They are also available on YouTube.

The melodic voice of Bob Ross has been found to generate feelings of ASMR, a form of tingling in the spine that leads to feelings of pleasure and relaxation. There have been many cases of Bob Ross videos being played as a form of relaxation therapy for those listening.

Make your own mind up, sit back and relax whilst you listen to the voice of Bob Ross. Find out more about our Bob Ross painting classes.

Sign up here to keep in touch about our Paint Night Parties, and other Fun Art events, and come to your first event. We won’t share your information with anyone, and hope to make you laugh. Come to 8 events and get a Paint Night free.